I really enjoy the process of creating my illustrations. Most of the time after completing a drawing I usually tire of looking at it for too long and am ready to start the creative process again. I am fond of this She-hulk illustration however, and like to look back at it as it contains two of my favorite people, my daughters, as well as some of my favorite subjects, comic art and Hulk!

My older daughter is a fan of the Incredible Hulk and She-Hulk and enjoys watching the old TV shows as well as looking at comic books and figures with me. I did this piece for her as well as a homage to She-hulk. The illustration is based on the cover of the first Marvel Comics issue of She-Hulk. 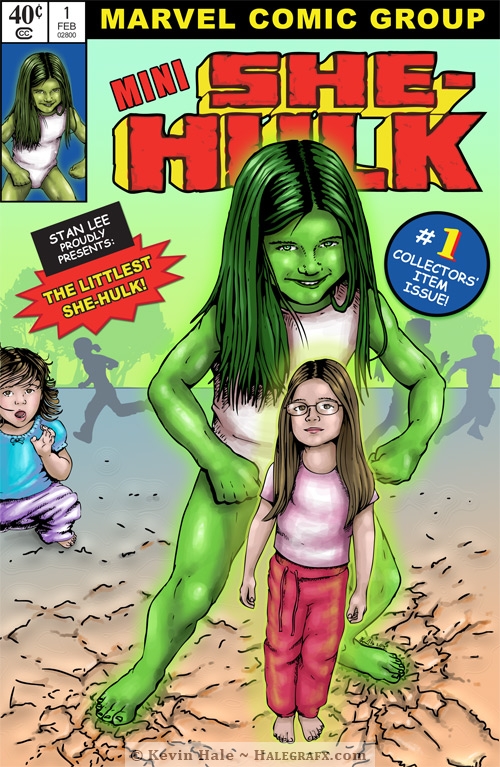 In the illustration my older daughter is changing into a mini She-Hulk and I have my younger daughter as one of the bystanders in the background in shock as she changes.

For this She-hulk illustration I worked from photos that I have of my daughters. I had them pose for some pictures but found out very quickly with my younger daughter that getting her to pose was difficult. It was hard to get her to do the right poses and doing candid shots became the best route. It just so happened she looked up in an expression of shock and I was able that get this great pic of her that worked for the background.

Using the photos, I first draw ink illustrations and then scan them into Adobe Photoshop for adding the color. While there are many other illustations I put away, sell as products, do for freelance or any other kind of scenario this is one particular piece I don’t mind having on my wall. 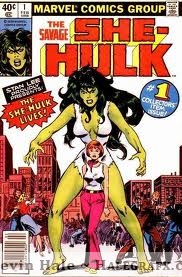