The Jak and Daxter game series by Naughty Dog was one of my favorite video games to play on PlayStation 2. It inspired me to create these  Jak and Daxter Color Blanks figures. If you’re not familiar with Color Blanks they are an inexpensive little figure that you can buy from Amazon.com or your local arts & crafts store. They are made of plastic and come completely blank. You can paintthem or color them with included markers and add stickers to them as well.  I’m used to working with polymer clay so I thought I would take my Color Blanks a step further.

In my experience with sculpting polymer clay onto Color Blanks I found that the plastic that is used to make these is not very tolerant to heat. As a result it’s a bit of a challenge to seamlessly sculpt pieces of polymer clay to your Color Blanks. The polymer clay will need to be heated to a certain degree in the oven and I found the pieces that are most susceptible to distortion are the arms and the body.

When I started on my Jak figure I sculpted his hair directly to the head without first cooking the clay. I use clay colors matching his native hair colors and molded them on until I got the desired look. I also made earpieces, eyebrows, shoulder pads and the straps in his chest plate. I then made the various pieces of his helmet but did not connect them.

I placed the polymer clay pieces of Jak in the oven inclusive of the Color Blanks soft plastic head. I cooked the clay about 15° lower than the recommended temperature but for a longer period of time. This seemed to work out well.

Then it was a process of painting and reassembling the Jak figure. I used acrylic paints of various colors until I achieved the desired effect.

Another important thing to note when reassembling the figure is that the head’s opening where it attaches to the body became distorted from the heat of the oven so I had to use an exacto knife to cut the opening larger to reassemble the head to the body. 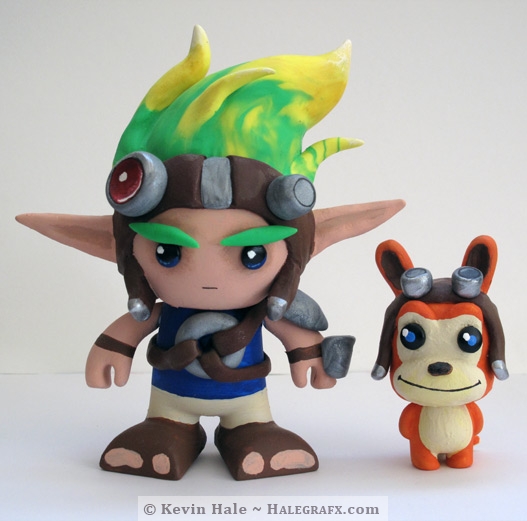