This is free printable Five Nights at Freddy’s play money for FNAF fans! You can give it out as a gift, put it in party favor bags, Let your kids use it to make believe, or using to teach your kids about money.

Each bill has custom serial numbers, symbols, fun little messages and a fun Five Nights at Freddy’s character in the presidents space. There are one dollar bills, fives and Tens. Eac having different colors, serial numbers and information related to the amount of money. The characters include: Freddy, Chica, and Bonnie

Kids can use these along with my other printable play money to open their pretend shops and sell fake food, candy and toys. These also work great as party of a general game party theme. Just print these out and let your kids imaginations go wild. Make learning currency fun for your children. You can download your free printable Five Nights at Freddy’s play money below. 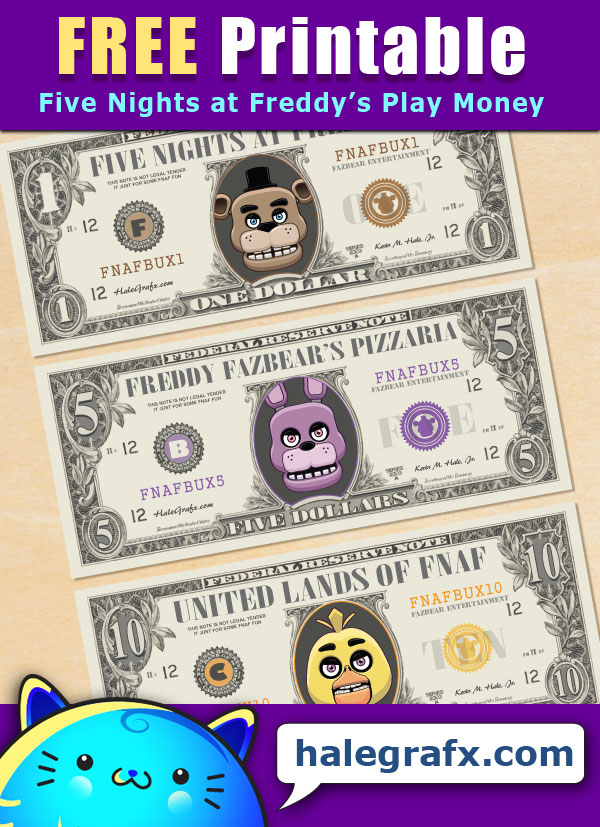 To complete your Five Nights at Freddy’s. party, check out these fun Five Nights at Freddy’s party supplies, table cloths, masks and other fun items such as a pinata. Grabbing some fun party decor, napkins and decorations will help tie together your game party theme! You could get a lot of your plates, utensils & streamers at the dollar store. Just get them in colors that match your party theme.