After a lot of tinkering I finally finished my Steampunk Megaman figure. I really find the steampunk genre fascinating so I think I will be doing more steampunk interpretations in the future.

To start this Steampunk Megaman figure, I used a simple Creatology vinyl penguin figure. These are similar in size to Color Blanks figures and provide a great blank canvas if you want to get really custom. These vinyl figures also have proportions much like a lot of the 8 and 16 bit video game characters which work great for recreating them. 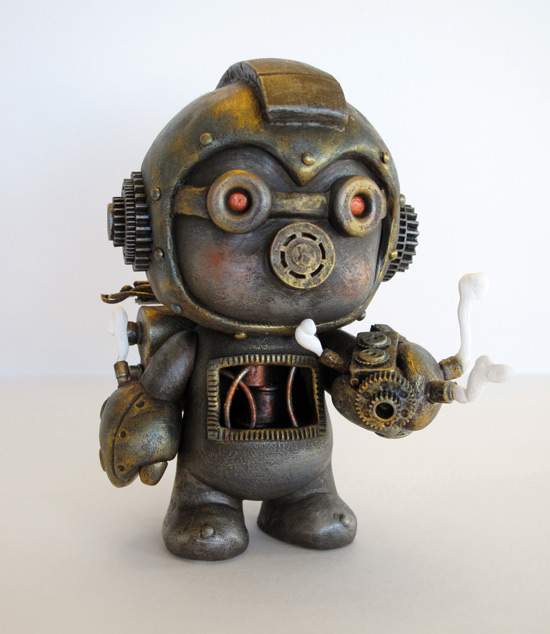 I used some polymer clay to sculpt elements such as the helmet, right arm and parts of the arm cannon. I bake the clay on the figure at a slightly lower temp to prevent warping of the vinyl.

I took a clip on light’s battery compartment and stripped it down to a very small container and wires. I then soldered on a resistor and smaller LED light. Small plastic gears and miscellaneous other spare parts were added to make the arm cannon more mechanical looking.

For additional effect I added a moving component in the chest of the Steampunk Megaman figure. I took a small electric motor saved from a broken printer and mounted it inside the head of the figure. The shaft of the motor goes down through the neck where I connected, offset and painted broken parts from a motherboard. It creates a great spinning effect. A wire passes through the back to cordless phone battery back, disguised as tanks, that powers the spinning chest shaft. This battery back is removable and rechargeable via a phone base.

See a full rotation of the figure in the video below as well as the spinning motion of Steampunk Megaman’s chest. 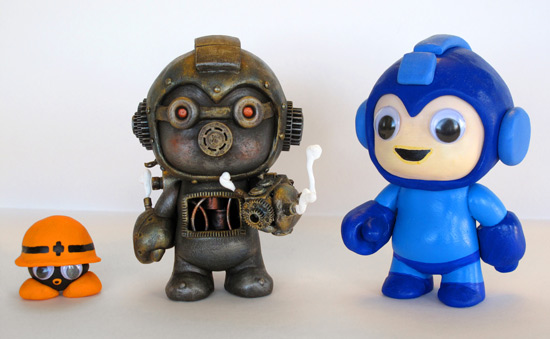